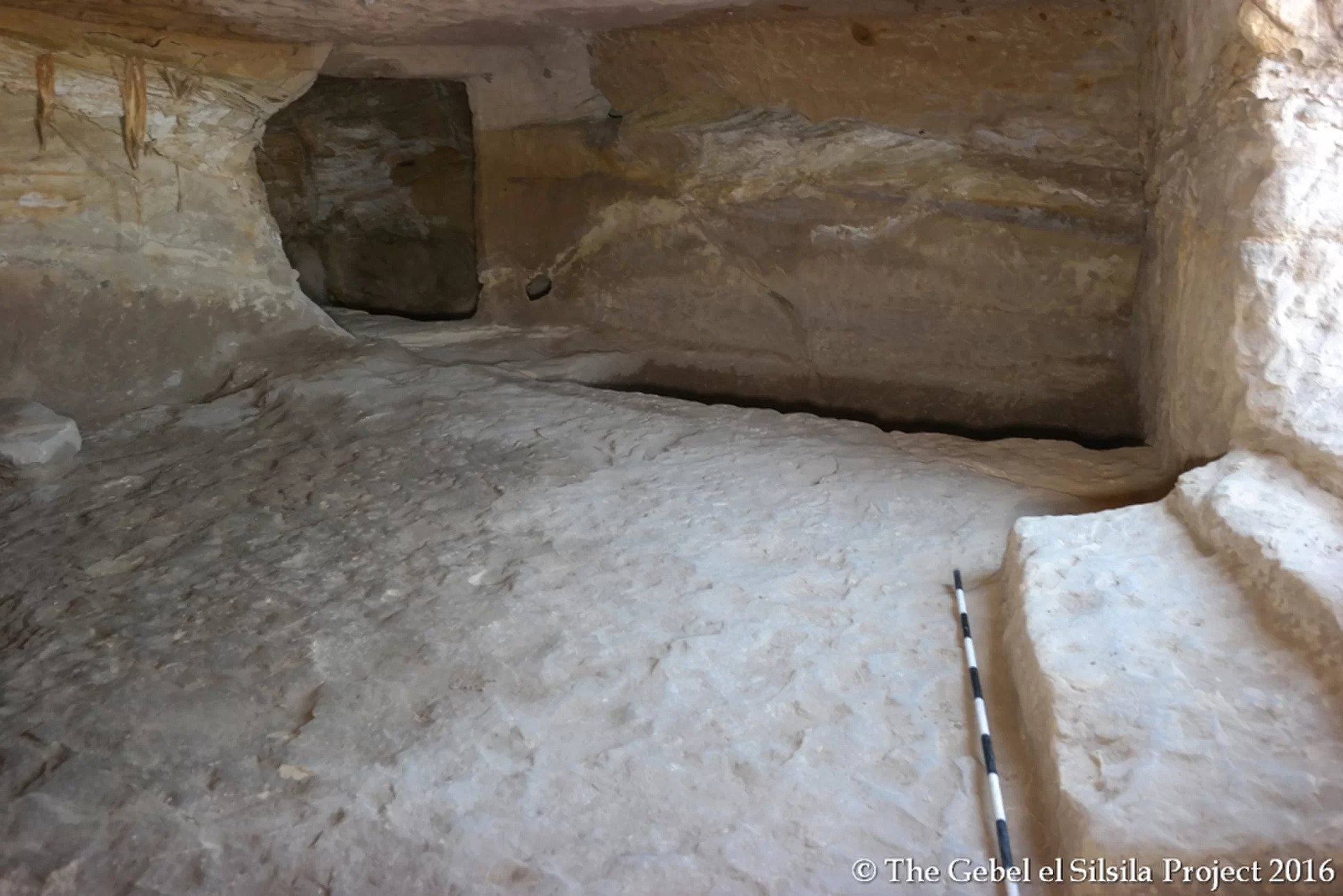 42 Tombs and a Shrine Discovered in Egypt:

42 rock-cut tombs and a shrine decorated with a winged sun disc have been found along the banks of the Nile River in Egypt.

The discovery of this necropolis, the burial ground of men, women and children, proves that Gebel el-Silsila in Upper Egypt was not just a quarry site for the kingdoms temples and tombs; it was also a bustling population center, according to the archaeological team that found the structures.

A big mystery surrounds the new tombs, however. Where is the lost city of Silsila? So far, archaeologist’s have found tombs, the quarry, a temple and slab monuments called stelae.

But they have not found a town or village where the people who used these structures would have lived.

Silsila was originally believed to be a sort of work camp, where the predominant activity was quarrying for sandstones.

Survey project mission director Maria Nilsson, Ward and their colleagues have been discovering much more than that at the site, but. Earlier this year, for example, they announced the discovery of 6 statues dating back 3500 years that depicted elite families.

Archaeologist’s had known that rock-cut openings were present on the site’s,  But the river has been eating away at the sandstone exteriors, damaging the structures.

The team of archaeologists launched a project to clean out 3 of the openings, both to find out what was inside them and to see if they could slow down the erosion.

They discovered that the tombs were filled with Nile silt, indicating that they had been flooding before the first dams in the river were constructed in the 1800s. This silt was acting as a “sponge” to draw in river water, worsening the erosional damage, Ward said.

“Once we started to clear this Nile silt, we could see that the actual sand stone surface itself was starting to dry out,” he said.

“Tomb” 1, which was already clear of silt, turned out not to be a tomb, but a 2-room shrine. While the outer room overlooks the Nile to the west, the inner room, which once had a slightly elevated floor, is damaged by water, Ward said. Despite the water damage, a carved stone solar discwith wings — a symbol of power and protection — is still visible, he said.

Tomb 2 is an actual tomb, with stairs leading down into a rough cut chamber without paintwork or any interior design.

The space is so small that workers have to kneel to fit inside rather than stand up, Ward said. Many human bones were found in a jumble inside, which was probably caused by the Nile waters, he said.

The tombs were also looted at some time in antiquity. Still, they contained many pieces of pottery such as beer jugs, offering plates, and bowl and storage jars — all funerary wares that were used in ancient Egyptian tombs, Ward stated.

The other 2 tombs that have been cleaned out, Tombs 14 and 15, were also looted, but both contained crypts carved into the floor.

The crypt in Tomb 15 even retains half its lid, Ward said. The excavation also turned up “lots and lots of beads,” Ward said. And most intriguingly, the archaeologists discovered a scarab amulet bearing the name of the 18th-dynasty Pharaoh Thutmose III and a seal right along with his cartouche (an oval symbol surrounding a royal name), reinforcing the theory that Silsila was more than just a work camp for quarry diggers.

These artifacts suggest that the peoples buried in the tombs were of higher standing than quarry workers, Ward said.

Each of the documented tombs has a door with notches carved in the door jambs that could have held a stone portcullis, which could have been raised or lowered for new burials.

“These are family tombs,” Ward said. The portcullis closures would have kept out flood waters and wildlife, though maybe not permanently. In Tomb 14, the archaeologist’s found crocodile scutes — the triangular, bumpy protrusions seen on crocs’ backs.

It is not certain whether a crocodile made it into the tomb, Ward said, or whether the scutes flowed in with the Nile floodwaters.

The team members plan to excavate more tombs in the next field season, and hope to find remains or names of the tomb occupants.

They are also continuing the survey in hopes of solving the biggest mystery surrounding Silsila: Where was the town, or village, that this necropolis served?

“We are pretty excited, to say the least,” Ward said. “It’s kind of nice to be able to say, ‘Silsila, we’ve got a necropolis now.'”