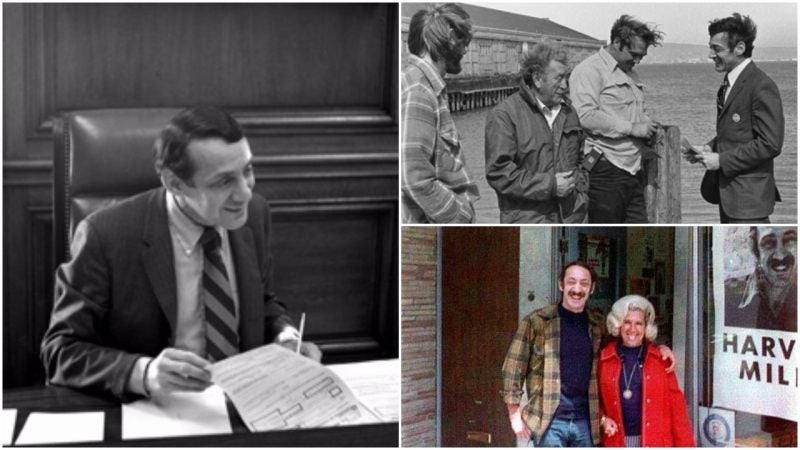 June’s month is LGBT Pride Month, in honor of the protests at Stonewall that took place at the end of June 1969. As a result, many pride events are held throughout the month to highlight the worldwide effect of LGBT people.

One such individual is undoubtedly Harvey Milk, regarded by many to be likely the most renowned public figure in LGBT and the first openly gay person to hold California public office.

Born in Woodmere, New York, Milk was Lithuanian Jewish parents ‘ eldest child. He’s been teased for his appearance at college. He was regarded by schoolmates to be the class clown.

He did the usual high school things such as playing football, but he also developed an interest in opera. He acknowledged his homosexuality to himself throughout his teenage years. Milk kept his sexual orientation a secret during that period, though.

Milk served in the Navy during the Korean War, and he earned a degree in math. While still in New York, he changed jobs and had several important relationships with men. In 1972, he moved to San Francisco, amid what would be a migration of gay men to the Castro District.

It would be here, in San Francisco, where Milk will pursue a career in politics, after facing the challenges and unfavorable policies a gay citizen of the city experienced in his everyday life. He went for the prestigious position of city supervisor, a path that would become the story of his life.

In the beginning, Milk faced resentment from the gay political establishment of the city.  Jim Foster, an active gay politician for some ten years, refused to endorse him for political office. However, his courageous and flashy speeches, as well as savvy media skills, quickly attracted the attention of several gay bar owners, as well as working-class groups.

Stepping forward as a leader of the small Castro community, Milk’s actions and campaigns started changing the Castro district. From a largely working-class neighborhood, as it was at that time, it evolved into a prominent environment of notable LGBT activism and events.

Milk looked for allies within organized labor and used the shifting political and economic climate in San Francisco of the mid-1970s to his advantage. The game changer that brought the public’s attention to the Castro District was an event in 1973 when two gay men attempted to open an antique shop. However, they were prevented from obtaining a business license by the Eureka Valley Merchants Association.

Milk, along with other business owners, decided to launch the Castro Village Association, with the aim of spreading a philosophy that gay men should support gay businesses and buy from them. When he ran for an election campaign in 1973, he earned 16,900 votes after getting the support of the Castro and a few other liberal districts of the city. It is around this time that he began building his image as “the Mayor of Castro Street.”

The next year, he organized the Castro Street Fair too, which attracted more than 5,000 attendees. Business only got better in the Castro, and Milk was becoming a serious candidate for the office of city supervisor.

In the following years, he reconsidered his campaigning approach, changing his lifestyle in certain ways, knowing what a good public image might mean to conservative groups. Milk started to find more support from groups such as firefighters and construction unions. Casto Camera simultaneously became the hub of activities in the neighborhood, while Milk would virtually pull people off the streets to engage them in his campaigning.

When George Moscone became the newly elected mayor of the city of San Francisco, Milk was publicly endorsed and acknowledged as being a very influential person in repealing a sodomy law earlier that year in the California State Legislature. Moscone would also invite Milk to take a position as a city commissioner.

In 1977, Milk’s theatrical campaigns finally paid off. With his popularity growing, he won the sought-after position of a city supervisor. His election was made possible thanks to the shift in San Francisco’s political circles. Milk served less than 11 months in the public office but successfully passed an important gay rights ordinance for the city.

Sadly, on November 27, 1978, Milk, as well as Mayor George Moscone, were killed by Dan White, another city supervisor. White had recently resigned to concentrate on a private enterprise, but his plans failed and he hoped to return to his previous position. White was sentenced to seven years in prison for manslaughter but was released earlier in 1983, after which he committed suicide in 1985.

Regardless of the fact that Milk’s political engagement had abruptly ended far too soon, he has become an icon of San Francisco and was deemed a martyr within the gay community. He was later called “the most famous and most significantly open LGBT official ever elected in the United States.”

A visionary as he was, he imagined an equal world for all, including gay men, and he took on the very real challenge of making that vision a reality. For his outstanding efforts, Harvey Milk was posthumously awarded the Presidential Medal of Freedom in 2009.