Some of the first people ever to stumble upon prehistoric fossils lived in Egypt 3,300 years ago. Their story likely started with a sandstorm. Some strong wind rose up and blew the desert sands away, exposing a secret hidden underneath: the hard, pitch-black bones of what looked like a gigantic monster.

We can only imagine what must have gone through the minds of the men who found them. They didn’t write a word about it – or, if they did, it’s been long lost to the decay of time. All we know is what they left behind: a tomb filled with prehistoric fossils, some of them as much as two million years old, hidden until 1922 AD. 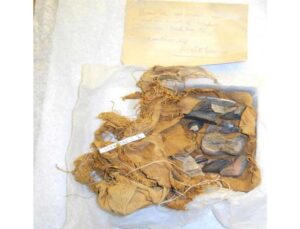 It’s a fascinating mystery that we’re unraveled. We don’t know for sure what sense they made of the bones of the massive prehistoric giants that they found. Slowly but surely, though, archaeologists are unraveled a few clues.

It’s taken nearly a century of research to discover anything about the prehistoric fossils found in ancient Egypt. When the first archaeologists , Guy Brunton and Flinders Petrie, found them, they didn’t even fully understand what they’d discovered. All they knew, at first, was that they’d found bundles wrapped in linen, with no idea what could be inside.

The Egyptians, after all, hadn’t put these bones on display. Instead, they’d taken them to a rock-cut tomb near a town called Qau el-Kebir. There, they’d given the massive, prehistoric bones the sort of dignified burial fit for royalty. They’d wrapped them up in fine linens and placed them in the tomb, buried with ivory tools to help them through the afterlife.

Whatever it was they thought they’d found, they believed it was something worthy of their respect. The tombs of Qau el-Kebir weren’t just makeshift graves thrown together for the occasion; they were the ancient resting places of powerful Egyptian lords, built 1,500 years before the fossils were found. 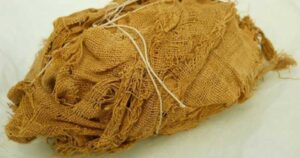 It was a place for the revered ancient dead; a place fit for the bones of a creature that, 2 million years ago, had terrorized the land that would become Egypt.

We still have no idea where the Egyptians found them. In 1926, shortly after they were uncovered, a geologist named K. S. Sandford combed every spot with 500 miles ( 805km) of Qau trying to track them down without success. To this day, nobody’s been able to figure it out for sure.

All we know is that they were moved. There were more than three tons of them and they had been dragged across miles of wild country, just to bury them again.

It must have felt like nothing short of a holy act. It would have taken an incredible amount of effort to move those bones, and a whole team of people must have been involved.

Their destination, Qau el-Kebir, was no ordinary town. It was the center of a cult dedicated to the god Set, god of darkness, storms, and confusion. He was the lord of the black land; a monstrous, evil force who was often drawn looking like a monster with a hippopotamus’s head. 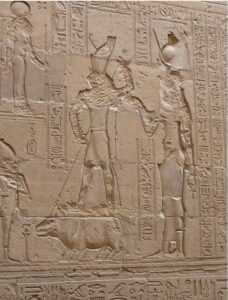 Without question, the bones were taken there on purpose. Whatever the Egyptians believed they’d found, they thought they belonged to the god of Chaos, and they were willing to do anything to bring them to him.

After more than 3,000 years buried in a tomb, Gun Brunton and Flinders Petrie pulled the fossils out, only to lock them up once again. They sent their discovery off to a museum, where they were left in unopened crates.

Brunton planned on writing a book about them, but he never did. And for nearly 80 years, they just sat in those crates; an incredible discovery forgotten.

It took until 2007 before anyone looked inside. In part, it was a matter of technology. Nobody wanted to tear open a 3,000-year-old linen bundle and risk destroying a priceless artifact. We had to wait for x-ray scanning machines that could show us what was hidden inside.

But finally, in 2014, the bones were revealed. Little pieces from countless extinct animals were inside: giant wildebeests, crocodiles, boars, horses, buffalos, and even human beings.

But the creature they saw the most of were the bones of massive, prehistoric hippopotamuses – the animal of the god Set. And every fossil had been polished over millions of years by river sands until they shimmered with the color of the chaos god: pitch black.

The Black Bones Of Set

Nobody knows for sure what the Egyptians thought they’d found – but there are theories. It’s very likely that, 3,300 years ago, the people who found those bones believed that they had stumbled upon the remains of a god.

The Egyptians had come to a similar conclusion before. Early Roman and Greek historians wrote that when the Egyptians found fossils from the coiled shells of nummulites near the pyramids of Giza, they took it as proof that Set had once ruled over their land. The small fossils were taken to a temple in Tienna and, there, were give up as an offering to the gods.

They may have felt the same way about the gigantic fossils they put to rest in Qau el-Kebir. The bones had been fossilized – they were incredibly hard – and their religion had long taught that the gods had bones made of iron .

Perhaps they thought what they had found was something more than an animal or a man. Perhaps, as paleontologist Kenneth Oakley has suggested, they recognized the fossilized remains of humans and giant hippopotamuses and assumed they’d all come from the same place: the remains of the half-human, half-bestial god of chaos, Set.

That, at least, is one theory – but to this day, nobody knows for sure what the ancient Egyptian fossils meant to the people who uncovered those prehistoric bones. All we have to work off of are a few archaeological finds – and so far, they’ve left us with more questions than answers.

But bit by bit, we’re uncovering more and more clues that give us a better image of our pasts – just like our ancestors did before us, 3,300 years ago.