In the ruins of a prehistoric town in eastern England, a 3000-year-old wooden wheel was discovered. Archaeologists said the Bronze Age wheel is the largest and best-preserved of its kind, dating back to 1100-800 B.C.

The wheel was extracted during a dig at the Must Farm in Peterborough, measuring approximately 3 feet(1 meter) and with a hub still intact. According to an announcement from Historic England, a heritage organization that is partly funding the excavation. 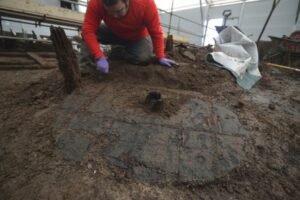 “This remarkable but fragile wooden wheel is the earliest complete example ever found in Britain,” Duncan Wilson, chief executive of Historic England, said in a statement.

He added that the discovery expands the understanding of the technological sophistication of people living in the region 3,000 years ago.

Must Farm, which was first discovered in 1999, has been described as “Peterborough’s Pompeii.” Pompeii was a Roman city that was destroyed when Mount Vesuvius erupted in A.D. 79.

Ash from that volcanic eruption left the town extraordinarily well-preserved, with elaborate murals and graffiti still intact on the walls of its buildings. Like Pompeii, the Must Farm site was frozen in time through catastrophe. 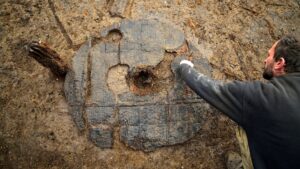 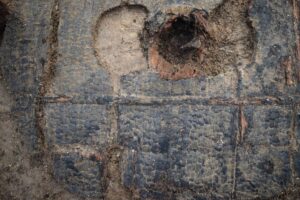 The circular wooden houses of the Must Farm site were built on stilts above a river channel, the old course of the River Nene. But a devastating fire caused the dwellings to plunge into —and become preserved in —the sandy water below, archaeologists said.

In addition to finding the wooden houses, excavators uncovered some rare items that might not normally survive in the archaeological record: a wooden platter, wooden utensils, clothing made from the fiber of lime trees and even jars containing the remains of food, perhaps abandoned when the fire broke out, the researchers said.

The Must Farm was partially excavated in 2006, but the site is currently undergoing a larger, £1.1-million ($1.58 million U.S.), eight-month excavation.

The archaeologists said they plan to dig trenches across nearly 12,000 square feet (1,100 square meters) of the site. They’re about halfway done with the project, according to Historic England.

In another clue that people of this era were quite savvy about transportation, eight Bronze Age boats were recovered from the same river in 2011. The discovered wheel suggests the people at the Must Farm site traveled to and had ties with the dry land beyond the river. 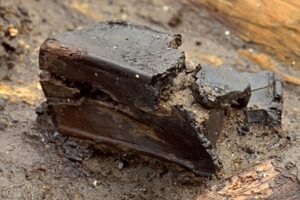 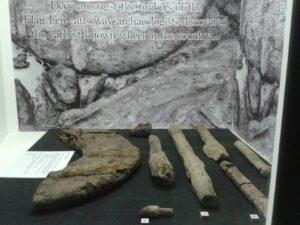 Technically, the new find isn’t the oldest Bronze Age wheel found in Britain. That distinction still belongs to the Flag Fen wheel, which was found at a nearby site and dates back to about 1300 B.C.  However, that artifact is less complete than the newly discovered wheel and is smaller, at about 2.6 feet (0.8 m) in diameter.