A very exciting archaeological discovery in a remote mountainous area of the country had been declared by the Kazakhstan Government. A team of archaeologists has unearthed a huge trove of golden objects and jewelry.

In relation to the ancient Saka people and culture, the discovery was considered one of the most significant in Kazakhstan ‘s history. This treasure will provide valuable insights into the life of the once influential Saka people.

The Saka were nomadic people who spoke Iranian and a subgroup of the large Scythian group that for centuries dominated the Eurasian steep. In Central Asia the Saka core region was established and extended from it into Iran , India and Central Asia. 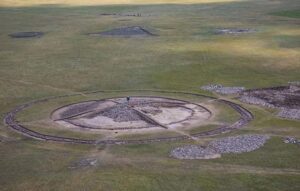 They were renowned for their horsemanship and their metal work.  The Saka were first recorded in the 9 th century BC and were a major military power.  However, they faded from the pages of history over time, but archaeologists have been rediscovering their culture and history in the twentieth century.

Kazakhstani archaeologists were excavated a Kurgan or a burial mound in the remote Eleke Sazy plateau in the Northeast of the Central Asian Republic. The team of experts is led by Professor Zainolla Samashev, who stated that “a large number of valuable finds in this burial mound”  was unearthed, reports KITCO News .

The site was first excavated in 2016, but there was also some digging at the site in the 18 th century in the reign of Tsar Peter the Great.

In total some 3000 golden objects have been recovered.  The golden treasure includes plates, and jewelry, including, chains with precious stones and bell-shaped ear-rings. A large number of exquisitely crafted animals have also been found.

There have also been a great number of golden beads that were used to decorate the elaborate clothing of the Saka. It is believed that the find dates from approximately 2,800 to 3000 years ago.

The burial mound is thought to be the final resting place of a noble couple or a family who belonged to the Saka elite. Typically, members of the elite were buried in Kurgans. The team of archaeologists has still not uncovered the remains of those who were buried in the mound and this raises the prospect of even more discoveries. 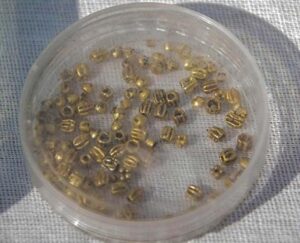 The discovery of the treasure is demonstrating the great metal-working skills of the Saka people.  The golden objects demonstrate that they could rivet gold and according to the Sun, ‘show sophisticated micro-soldering technique’. This allowed them to create beautiful jewelry and other artifacts. They clearly had advanced metallurgical skills and were adept at mining and extracting gold.

There has been great excitement in Kazakhstan at the announcement of the discovery.  KITCO News reports that Danial Akhmetov, the local Governor, stated that the find “gives us a completely different view of the history of our people.’ The discovery of the priceless golden objects shows that the people of Kazakhstan are descended from a great culture.

The discovery of so many astonishing golden objects is demonstrating the sophistication of the Saki and that they were master craft persons. It also demonstrates that, despite the fact that the Saki were nomads, they were very advanced. 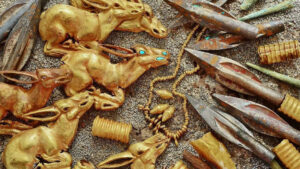 The discovery of the golden objects and the expectations of many more in the Kurgan will allow experts to gain more insights into the Saki and their culture.

There are plans for more excavations in the area, it is believed that there are some 200 burial sites in the locality. There are so many located here because, according to the Daily Mail, ‘the plateau with rich pastures was seen as paradise by the Saka Kings’.

However, experts are cautious about how many more discoveries are yet to be made. That is because grave robbers and looters have long been removing precious items from the Kurgans.