This amazing stone was discovered thanks to a crack that developed 500 years ago in a megalith that revealed Chinese characters that read: Collapses of the Chinese Communist Party (Zhong Guo Gong Chan Dang Wang).

The problem is the rock age, which dates back 270 million years, according to researchers.

It is an astonishing discovery of a stone that displays curious patterns on its surface, according to researchers these patterns have been identified as Simplified Chinese characters and traditional Chinese charters that read: Communist Party of China perish or The Chinese Communist Party Collapses ”

It is one of the main attractions in the Qiannan Pingtang National Geological park. The mystery is its age; dating back at least 270 millions of years to the Permian period.

The stone was discovered in the cleaning process of the Duyun International Photography exposition, and the area has remained isolated and untouched by humans for an incredible period of time. The stone is found in a narrow gap between two cliffs.

Scientists have rushed to the area since 2003 when the first scientific inspection group arrived to study the stone. 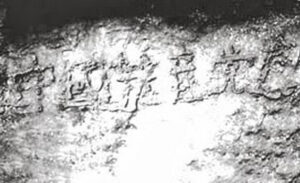 Researchers were shocked when they found out that the stone was about 270 million years old, form the Permian period and according to scientists like Li Ting-dong, Liu Bao-jun and Li Feng-lin there is no trace of the characters being made by human beings.

According to these scientists this is a unique stone and there is nothing like it. The characters that appear to be written on the stone are one square foot.

Some of the mysteries that involve this strange stone is that the characters read from left to right, something that was not practiced at that time and scientists consider that since there is an inclusion of a Simplified character before the CPC.

Skeptics have attributed the mysterious formation to the nearby village, saying that it was manufactured to boost the tourism of the area.

Yet researchers claim that the inscription dates back hundreds of millions of years given the fact that the geological formation of the region is of that age.

The vice-editor of the People’s Daily, Liang Heng wrote, While on cliffs people may often discover that white clouds may appear to look like dogs, or something looks like a person or a beast, a picture or a chart, however, all such things are restricted by the appearance of the picture.

If today a megalith suddenly can write, speak, carve, develop writing technique, or use political terminology, how are people able to believe that? Do they even dare to believe that? However, facing these two pieces of the split hidden words stone, we have no alternative but to believe.

Researchers were able to determine that “the hidden words stone” actually fell from a mountain cliff near the Zhangbu river valley.

One can easily make out the corresponding dent from where the rock mush have fallen.

So how is it possible that a crack reveals an inscription like this, when researchers place the age of the stone at over 250 millions of years?