27 people lost their lives while filming the movie “The Viking” In 1931. 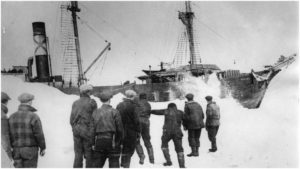 Sometimes movie sets can be dangerous places. For instance, actress Kate Winslet nearly drowned during the filming of James Cameron’s 1998 movie Titanic, and a number of stuntmen ended up in the hospital for broken ribs, broken cheekbones, and other injuries.

One stuntman died when The Expendables 2 was filmed in 2011, and another was injured in an on-set accident.

Sylvester Stallone and Arnold Schwarzenegger had to undergo shoulder surgery when the filming was finished. Also, three actors, including Vic Morrow, died in a helicopter crash during the filming of Twilight Zone: The Movie in 1981.

These kinds of accidents during filming are isolated incidents today. however, Things were different in Hollywood’s early days when movie sets were much more dangerous.

At that time, as the film was a promising new medium offering countless possibilities, the techniques of filmmaking were purely experimental, and directors often exposed their casts and crews to harsh and extreme conditions.

This frequently resulted in accidents, and some of them were devastating.

During the filming of The Viking, released in June 1931, the deadliest on-set accident in cinema history occurred.

The movie, which was celebrated for being the 1st movie ever to feature sound and dialogue recorded on location, depicts a graphic story of dramatic events taking place during a seal-hunting expedition along the coast of Newfoundland in Canada.

In order to accurately portray the hardships of seal hunting and to film action scenes on ice floes, director Varick Frissell and his crew boarded actual sealing ships and filmed scenes near Grand Banks and Labrador.

When the filming was finished, Frissell organized a private screening of The Viking for his friends and crew.

After the screening, he was quite satisfied with the movie but he decided that it didn’t contain enough quality shots of Canadian icy wastelands, so he and a number of his crew members boarded the SS Viking in early March of 1931 and accompanied the ship’s crew on their annual seal hunt off the coast of Labrador.

On March 13, the ship got trapped in ice near Horse Islands, off the coast of Newfoundland.

While waiting for the sealers to free the ship, Frissel and his crew walked around on thick ice and filmed priceless footage of the giant and powerless vessel that was unable to move an inch.

2 days later, the sealers realized that their efforts to manually free the ship were pointless because the ice was too thick, so they decided to use explosives to break the immovable ice that surrounded the ship.

25 crates full of dynamite were stored in the ship’s powder room, and the ship’s crew began preparing explosive charges.

Unfortunately for both the sealers and Frissell and his crew, one of the men in charge of preparing the charges accidentally ignited one of them in the powder room.

As a result, all 25 dynamite crates exploded one by one and ripped the entire rear part of the ship completely apart.

27 men were immediately killed by the gargantuan explosion, including the unlucky director. His body and the body of his beloved Newfoundland dog, Cabot, have never been found: their bodies were either completely disintegrated by the detonation or they ended up deep below the eternal ice.

Despite Frissel’s tragic death and several members of his crew, a few months after the unfortunate incident, The Viking was officially released. It got mixed reviews.

The critics and the audience of the time marveled at the extraordinary shots of Canadian icy landscapes from the film and the emotionally devastating seal hunting footage, but the story shown in the film was described as unimaginative and flawed. Nevertheless, for its catastrophic death toll, the film remains infamous.