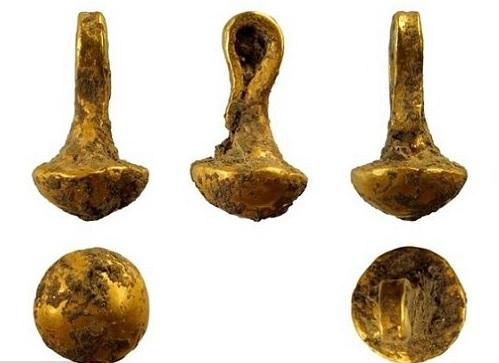 24-carat gold jewellery made 6,600 years ago found at prehistoric settlement in Bulgaria 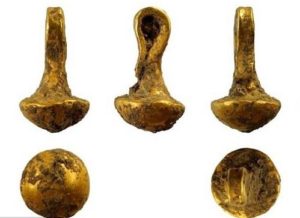 Archeologists from the National Archeology Institute of Bulgaria published details of the research carried out in the vicinity of modern-day Provadia and near the existing archeological site of Varna.

They had probably located Solnitsata, the oldest city in Europe. The archeological community was amazed by the sophistication of the town and its neighborhood, as this small town was well developed at least a thousand years before the Greeks.

In these Neolithic times, a man had barely moved from hunter-gatherer status, animals were being domesticated, the plough was just being introduced to Europe from Egypt, and beer brewing was being developed.  Metallurgy and the ability to work metals was known but not highly-developed.

Most settlements consisted of small houses, sometimes with a longhouse at the center.  They were most often in the open but sometimes surrounded by a simple ditch.

Solnitsata owed its very existence to the salt water springs that were situated close to the settlement.  The settlement has been dated to 4,700 BC to 4,200 BC, but salt production started as early as 5,400 BC.  This little settlement, probably with no more than 350 residents, harvested and bartered with the oldest known ‘currency’ in the world – salt.

The water from the brine springs contained a very high percentage of salt – 160 to 190 grams per liter of water.  The inhabitants drew the water and poured it into pottery bowls that measured around sixteen inches in diameter.

These bowls were then placed in a fire where the water was boiled off, leaving the salt behind.

The salt was formed into blocks and was then ready to be traded for food and other goods.   In the late Chalcolithic period, around 4,200 BC, the inhabitants started instead to boil the water in large pottery urns which had been placed inside deep open air pits, some as wide as ten meters.

This meant that salt was being produced on an unprecedented scale, with production thought to be in the range of eight to ten thousand pounds at a time.

The logistics of the production and movement of this volume of product, without the aid of wheeled vehicles (the wheel had not yet made an appearance), was astounding.  Wood had to be cut for the fires, water gathered from the springs, pottery urns manufactured, and the end product distributed for bartering.  Scholars postulate that all this was done with the aid of animal-drawn sleds.

Scholars have found that this town boasted double-storied houses in addition to very advanced fortifications.

In the Neolithic period, the town had been fortified with a palisade of wooden stakes driven into the ground and supported by earthworks.  But later, in the Chalcolithic period, the residents constructed a stone wall to surround their town.

The wall would have been an enormous undertaking for a people that did not have access to wheeled vehicles.  Evidence has been found of the walls being thirteen feet wide at their base and built in a circle with a diameter of ninety meters.

This underscores the value of the commodity that they had – salt was extremely valuable and they needed all the protection they could get, as their town would have been exceptionally wealthy.

The discovery of this wall makes Solnitsata the oldest fortress in the world; it would have been a prime target for envious plunderers.

An indication of the wealth of the town comes from the discovery of a small gold pendant dating to 4,300 BC.  The little pendant, weighing just two grams and thought to be the equivalent of 24-carat gold, resembles a little button at the end of a looped shank.  The interesting thing about this pendant is that it was not found within a grave, but in the earth between two graves.

This location gives rise to the theory that the pendant was not part of the grave goods for a particular burial, but something else entirely.  Archaeologists believe that this particular piece of jewelry could be two to three hundred years older than the other artifacts around it.

This raises some very interesting questions.  What was the significance of this tiny object?  Could it be for the purpose of adornment, or worn as a symbol of a particular person’s stature? Could this have been cast right at the very beginning of the existence of the town and given to the leader of the group as a symbol of his authority? Could it have been worn by a priest or shaman or other holy men?  Close by, in the site at Varna, a quantity of gold ornamentation has been found, but at Solnitsata this small pendant is the only gold ornamentation that has come to light thus far.

The small fortified town appears to have afforded its inhabitants a high standard of living, but they also had to have serious protection against the highway robbers of the time.

It is not known if they had extensive farms and other food production but, with the wealth that they derived from their salt, they would have been able to purchase or barter any commodities that they needed. Archaeologists theorize that the town was demolished during an earthquake, but the reason why it was never rebuilt is unknown.

With the highly-developed production of salt at Solnitsata and the gold and copper processing capability of the people of Varna, it is not unreasonable to believe that a sophisticated and highly-functioning society existed in this region at the beginning of the Bronze Age.  The area would have been visited by traders from near and far, and its products would have found their way all over the Balkans.