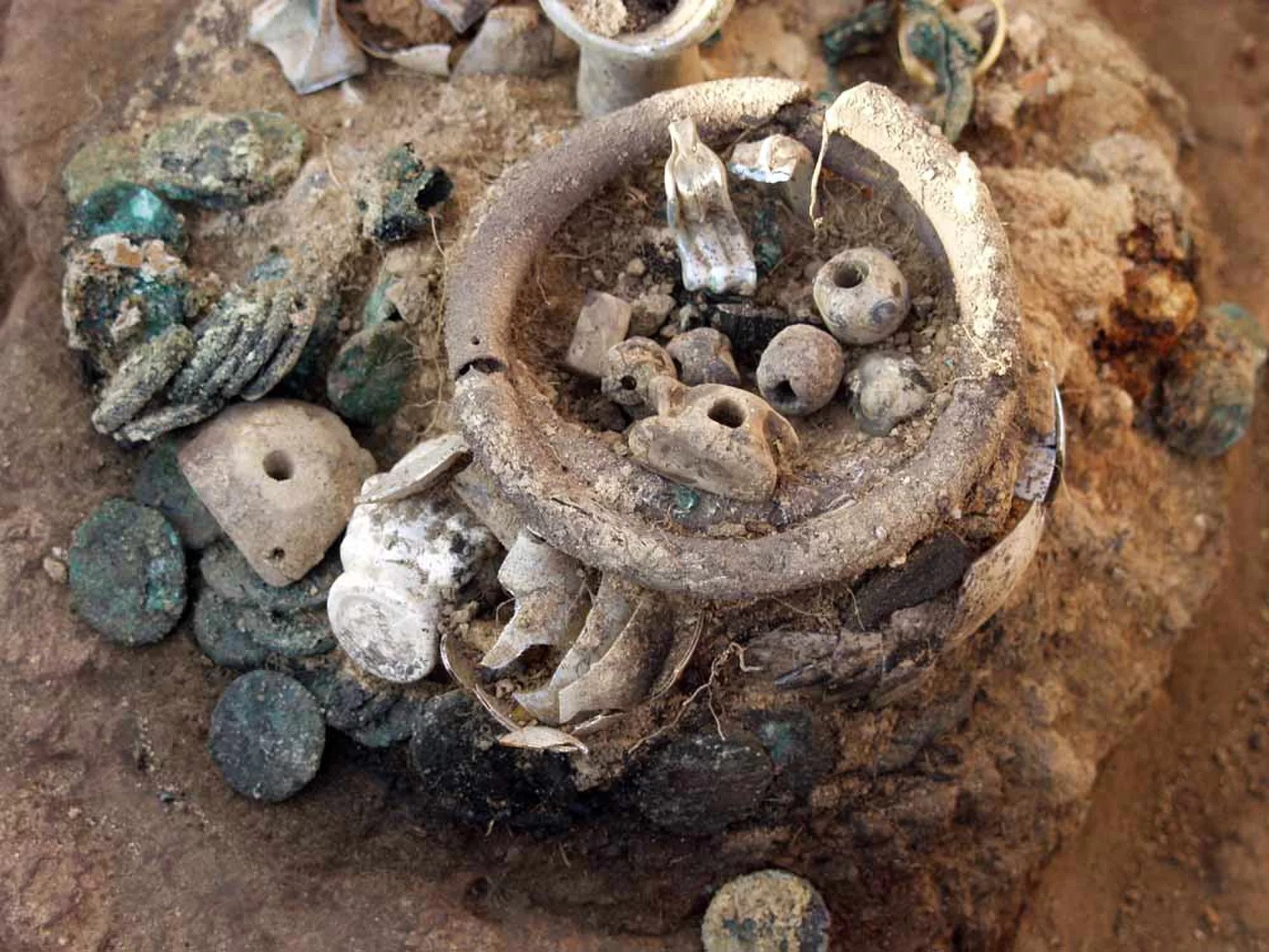 Residents of a town under siege by the Roman army about 2000 years ago buried two hoards of treasure in the town’s citadel — treasure recently excavated by archaeologist’s.

More than 200 coins, mainly bronze, were discovered along with “various items of gold, silver and bronze jewelry and glass vessels” inside an ancient fortress within the Artezian settlement in the Crimea (in Ukraine), the researcher’s wrote in the most recent edition of the journal Ancient Civilizations from Scythia to Siberia.

“The fortress had been besieged. Wealthy peoples from the settlement and the neighborhood had tried to hide there from the Romans.  They had buried their hoards inside the citadel,” Nikolaï Vinokurov, a professor at Moscow State Pedagogical University, explained.

Artezian, which covered an area of at least 3.2 acres (1.3 hectares) and also had a  necropolis (a cemetery), was part of the Bosporus Kingdom.

At the time, the kingdoms fate was torn between 2 brothers —Mithridates VIII, who sought independence from Rome, and his younger brother, Cotys I, who was in favor of keeping the kingdom a client state of the growing empire.

Rome sent an army to support Cotys, establishing him in the Bosporan capital and torching settlements controlled by Mithridates, including Artezian.

People huddled in the fortress for protection as the Roman’s attacked, but Vinokurov said they knew they were doomed. “We can say that these hoards were funeral sacrifices.

It was obvious for the peoples that they were going to die shortly,” he wrote in an email to LiveScience. The siege and fall of the fortress occurred in AD 45.

Curiously, each hoard included exactly 55 coin’s minted by Mithridates VIII. “This is possibly just a simple coincidence, or perhaps these were equal sums received by the owners of these caskets from the supporters of Mithridates,” the team wrote in its paper.

Vinokurovs team, including a number of volunteers, has been exploring Artezian since 1989 and has found that the people of the settlement followed a culture that was distinctly Greek.

The populations ethnicity was mixed, Vinokurov wrote, “but their culture was pure Greek. They spoke Greek language, had Greek school; the architectures and fortification were Greek as well. They were Hellenes by culture but not that pure by blood.”

Greeks are known to have created colonies on the Black Sea centuries earlier, intermarrying with the Crimeans. The customs and art forms they introduced appear to have persisted through the ages despite being practiced nearly 600 miles (1000 kilometers) from Greece itself.

This Greek influence can be seen in the treasures the people of Artezian buried. Among them is a silver brooch engraved with an picture of Aphrodite, the Greek goddess of love, and gold rings with gems engraved with images of Nemesis and Tyche, both Greek deities.

When archaeologist’s excavated other portions of the torched site they found more evidence of a Greek lifestyle.

“In the burnt level of the early citadel, many fragmentary small terra cotta figures were discovered depicting Demeter, Cora, Cybele, Aphrodite with a dolphin, Psyche and Eros, a maiden with gifts, Hermes, Attis, foot soldiers and warriors on horseback, semi naked youths,” the researcher’s wrote in their paper, adding fragments of a miniature oinochoai (a form of Greek pottery) and small jugs for libations also were discovered.

All this was torched by the Romans and later rebuilt by Cotys I, who had been successfully enthroned by Rome.

However the treasures of the earlier inhabitants remained un discovered beneath the surface, a testament to a desperate stand against the growing power of Rome.