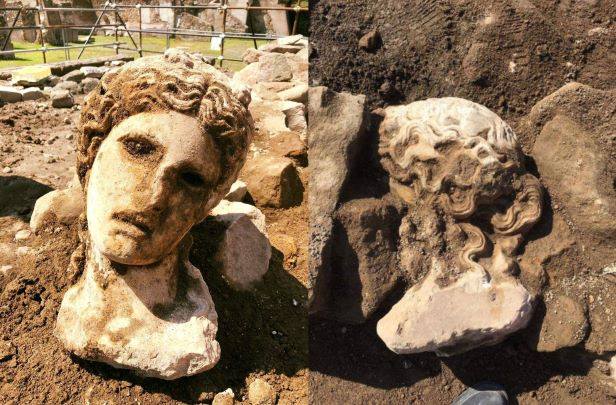 Archeologists in Rome have uncovered a large marble head from the imperial age of Rome which is thought to show Dionysus, also known as Bacchus, the Greek god of wine, music, and dance.

During last week’s excavations, the white marble bust, thought to be 2,000 years old, was discovered in the heart of the city, near the Roman Forum.

The head was reused as part of a medieval wall, but experts say it’s in great condition.

The head, with hollow eyes probably once filled with glass or precious stones, would have belonged to a large statue of the god created in the imperial age.“The archaeologists were excavating a late medieval wall when they saw, hidden in the earth, a white marble head,” said a statement from the Archaeological Park of the Colosseum, which encompasses the Roman Forum.

“It was built into the wall, and had been recycled as a building material, as often happened in the medieval era. Extracted from the ground, it revealed itself in all its beauty.”“The face is refined and gracious, young and feminine.

All of which makes us think this could be a depiction of Dionysos.”The marble head will be cleaned and eventually put on display.“Rome continues to surprise us every day,” said Virginia Raggi, the mayor of the capital.

The head of the statue… is in excellent condition. It’s a marvel.”Dionysus was the son of Zeus and Semele, the mortal daughter of the king of Thebes.

He was known as the god of wine, winemaking and grape cultivation, as well as of fertility, theatre and religious ecstasy.

He was worshiped by the ancient Greeks as one of the 12 Olympians before being incorporated into the Roman pantheon of gods as Bacchus.