The 116-meter-long tunnel drilled in 1930 by the archaeologist Eduardo Noguera was used to excavate 59 stratigraphic wells and 3 short tunnels by the Pyramid of the Sun project led by Alejandro Sarabia in order to enter the mother rock floor, to check the existence of burials and offerings.

“We know if the Teotihuacans had put anything inside the monument they would have happened at the tepetate level, so we did a quick test right at the end of the tunnel and a short conduct to reach the centre of the pyramid, since Noguera tunnel was carved approximately 6 metres to the west of the centre of the monument”, said Perez Cortes. During the course of the excavation, 3 architectural structures built before the Pyramid of the Sun and 7 human burials, some of them referring to infants, were found, which were buried before the completion of the building, as well as 2 offerings, one of them great richness.

The sumptuous offering was discovered at the meter 85 of the tunnel, inside the constructive filling, “so we know it was deposited as part of a consecration ceremony of the structure, probably at the beginning of its construction more than 1900 years ago” mentioned Perez Cortes, researcher at Zacatecas INAH Center.

The rich deposit, where a greenstone mask outstands, was integrated by several levels of objects; since the area of archaeological material extended to the south of the limits of the probing well, they decided to expand the exploration.

Among the 3 greenstone sculptures found, outstands an extraordinary anthropomorphic mask carved out in one piece, with eyes inlayed in pyrite and shell, declared Perez Cortes; the serpentine mask, according to studies conducted by Dr. Jose Luis Ruvalcaba, from the National University Physics Institute (IF UNAM), is the only greenstone mask discovered until now in the ritual context of Teotihuacan.

The 11 centimeters high, 11.5 wide and 7.8 cm deep mask is different to other Teotihuacan masks because it presents smaller dimensions and has volume; it is possible that it was a portrait. A seashell was found next to the sculpture. 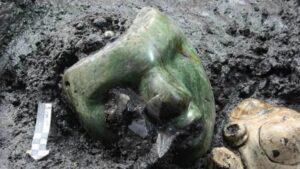 The offering also contained 11 Tlaloc vessels, most of them fragmented, placed in the center of it. Other objects deposited include 3 pyrite discs, being the one with 45 centimeters diameter mounted on a slate slab the greatest recovered until now in Teotihuacan.

An important amount of animal skeletons was found. The skull of a feline was placed to the northeast; a canine to the south, and an eagle covered with volcanic rock, to the southeast. The bird was fed before the sacrifice with 2 rabbits, as analyses reveal.  This kind of fauna is similar to the one found at offerings of the Pyramid of Moon. Researchers from the Pyramid of Sun Project at Teotihuacan Archaeological Zone (ZAT) remarked that the offering remained underwater, since humidity of the monumental structure concentrates on the base and central area.

Dr. Saburo Sugiyama, professor at Aichi University, Japan, and Alejandro Sarabia, director of the archaeological zone located in Estado de Mexico, indicated that for a long time before the discovery, the function of the pyramid was linked to the underworld because of the tunnel excavated by Teotihuacan people.

“Nevertheless, objects found would be indicating that the Pyramid of the Sun –which covers an approximate area of 5.6 hectares- was possibly offered to a rain deity, an early version of Tlaloc, during the first 50 years of the Common Era”.

“Until now, we can only offer a general interpretation of the findings, although it is evident that some of them present the same distribution pattern already observed at the Pyramid of the Moon burials”, concluded the specialists.

History of “Pyramid of Sun”: 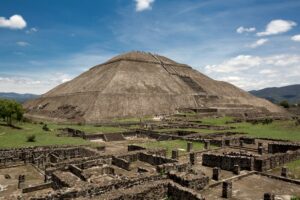 The Pyramid of the Sun is the largest building in Teotihuacan and one of the largest in Mesoamerica. Found along the Avenue of the Dead, in between the Pyramid of the Moon and the Ciudadela, and in the shadow of the massive mountain Cerro Gordo, the pyramid is part of a large complex in the heart of the city.

The name Pyramid of the Sun comes from the Aztecs, who visited the city of Teotihuacán centuries after it was abandoned; the name given to the pyramid by the Teotihuacanos is unknown. It was constructed in two phases. The first construction stage, around 100 A.D., brought the pyramid to nearly the size it is today.

The second round of construction resulted in its completed size of 738 feet (225 meters) across and 246 feet (75 meters) high, making it the third largest pyramid in the world, but being much shorter than the Great Pyramid of Giza (146 meters). The second phase also saw the construction of an altar atop of the pyramid, which has not survived into modern times. The Adosada platform was added to the pyramid in the early third century, at around the same time that the Ciudadela and Temple of the Feathered Serpent, Teotihuacan Pyramid of the Feathered Serpent were constructed.

Over the structure the ancient Teotihuacanos finished their pyramid with lime plaster imported from surrounding areas, on which they painted brilliantly colored murals. While the pyramid has endured for centuries, the paint and plaster have not and are no longer visible. Few images are thought to have been included in the mural decorations on the sides of the pyramid. Jaguar heads and paws, stars, and snake rattles are among the few images associated with the pyramids.

It is thought that the pyramid venerated a deity within Teotihuacan society but the destruction of the temple on top of the pyramid, by both deliberate and natural forces prior to the archaeological study of the site, has so far prevented identification of the pyramid with any particular deity. However, little evidence exists to support this theory.