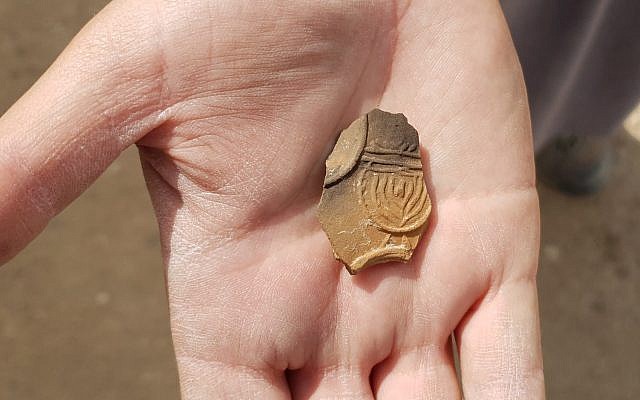 Among the artifacts uncovered at this important site is an intriguing portrayal of a nine – stemmed menorah that illustrates an oil lamp sherd.

According to IAA archaeologist Dr. Daniel Varga, “This is probably one of the earliest artistic depictions of a 9 branched menorah yet discovered.”The site is dated to the 1st century CE and was settled until the Bar Kochba Revolt in 135 CE. According to the IAA press release, underground hidden passageways discovered there may have been used by Jewish rebels.

Unearthed on the southernmost border of Judea next to a road that led from Tel Beer Sheva to the southern coastal plain, the 2-dunam (half-acre) site’s finds indicate a continuation of Jewish religious practice on the edges of the kingdom, such as ritual baths, stone vessels associated with laws of purity, and an abundance of pottery and lamps decorated with typical Jewish themes such as grape leaves.  Additional finds include olive and date pits and baking facilities.

Despite being on the fringes of Judea, the settlement was not free of the turmoil experienced throughout the Roman-occupied Holy Land during this era: “Signs of a conflagration discovered in some of the structures evince a crisis that the settlement experienced, probably that of the First Jewish Revolt in c. 70 CE,” said lead excavators, Dr. Peter Fabian of the Ben-Gurion University in the Negev and the IAA’s Varga. The discovery of a thriving Jewish settlement in this part of the Roman province was hailed by experts.

“We don’t really have any Jewish sites from the Second Temple period in this area,” said archaeologist Shira Bloch.“Our excavation is large, complex and very interesting.”In addition to its size and preservation, Bloch emphasized that the site’s significance is also drawn from the clear evidence that despite being on the outskirts of the kingdom, the residents “kept their Judaism.”

But the site won’t be visible for long: The dig is part of a salvage excavation ahead of a new neighborhood near the city’s northern entrance and, according to Bloch, unless there is a large public outcry, only the watchtower is currently planned for conservation.

In cooperation with the IAA and Ben-Gurion University, along with pre-military academy participants who volunteered, the dig had a short month-long summer season and was restarted in January. It will conclude at the end of next week, after which time it will likely be backfilled. “There is still a tiny bit of hope that it won’t be refilled,” said Bloch.

According to Bloch, the first part of the excavation yielded few results. However, after the team dug down approximately 2 meters, it reached a plethora of finds. With the clock ticking, there is still a lot that could be done, she said, as researchers continue to puzzle over the people and purpose of the site.

Despite the watchtower, said Bloch, there is no real evidence that it was a military outpost and there were no swords or arrows discovered. The tower, she said, was likely for local use to watch over the Jewish settlement.

The site, located on the southern border of Judea, offered up signs of an overlap of cultures, such as Nabatean pottery, as well as sherds that in initial examination appear to be from overseas, including the Greek islands and elsewhere in the Mediterranean, said Bloch.

Additionally, said Bloch, some 40 coins were uncovered, which still need to undergo cleaning and analysis. According to the IAA press release, among them are dozens of bronze coins from the period of Roman provincial rule, some of which were minted in Ashqelon and others were minted in cities from throughout the Roman Empire.

The jewel of the excavation so far is the depiction of the nine-stemmed menorah. Bloch clarified that while it may be tempting to call it a “hanukkiah,” a menorah which has a total of nine flames that is used during the Jewish winter holiday of Hanukkah, there is no evidence of holiday celebrations there at that time and therefore one cannot assign that purpose to the illustration.

The team is still excavating the underground chambers, but, at least until now, they appear to be small rooms or underground cupboards for storage, said Bloch.“We have only managed to get to the bottom of one… the rest are a lot larger and appear to be storage rooms, not passages yet. But as we dig, they keep getting bigger and bigger,” said Bloch.