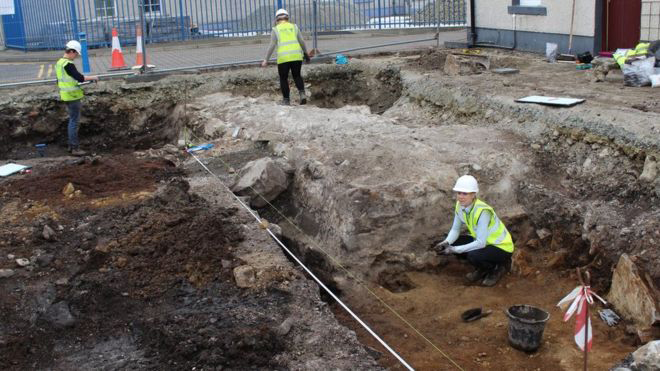 During construction work in Lewis, the remains of a 17th-century garrison were uncovered.

Archaeologists believe it was built on the orders of Oliver Cromwell and that English soldiers were billeted there for almost a decade.

A stone wall almost 3m (10ft) thick and 2m (6ft) high was discovered during work to add an extension to a Stornoway Port Authority office.

The work at Amity House on Esplanade Quay has been postponed.

Stornoway Port Authority is looking at how best the archaeology can be preserved.

Mary Peteranna, of AOC Archaeology, said, “We have uncovered one section of a substantial wall surviving up to 1.5m high.

“The wall face is very well-built and comprised a battered or slightly sloping outer face. This, together with its breadth of about 2m, tells us that it’s not just a building wall.

“The structure was built for a more substantial purpose, and we believe it formed part of the Cromwellian defensive rampart.”