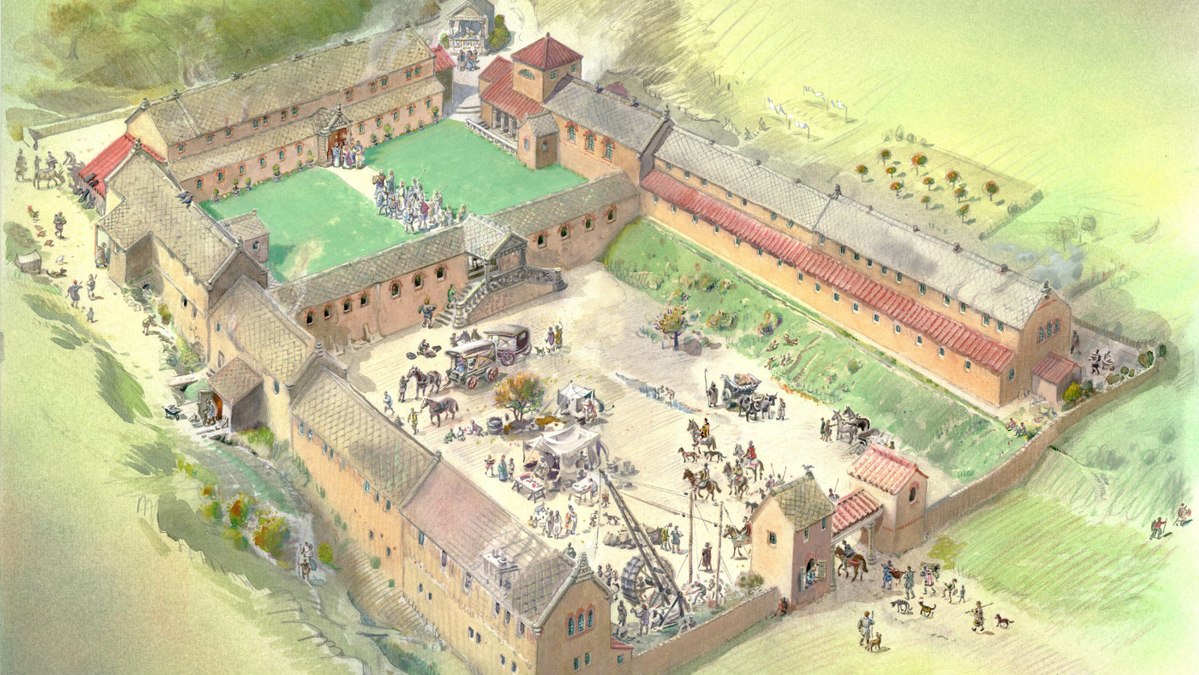 Excavators Found a 1,700-year-old mosaic that once decorated a luxurious Roman villa in Lod, known in Roman times as Diospolis (City of Zeus).

The discovery was made during archaeological excavations carried out in the past month by the Israel Antiquities Authority (IAA) in preparation for the construction of a visitors centre in Lod that will exhibit mosaics exposed several years ago at the site.

In 1996, road workers found by chance a mosaic floor at the entrance to Lod, adjacent to Ginnaton Junction. In subsequent excavations directed by the late archaeologist Dr.

Miriam Avissar, the remains of a luxurious villa with exceptionally well preserved, unique mosaic floors dating to the 4th-century CE were discovered.

According to Dr Amir Gorzalczany, the director of the current excavation, the excavations at the site exposed a villa that included a large luxurious mosaic paved reception room, known as a triclinium. An internal columned courtyard, also with mosaics, and a water system were also discovered.

“We found evidence for Mediterranean luxury that characterized the Roman Empire, including attributes such as fresco wall paintings,” said Gorzalczany.

The mosaics depict realistic and fantastic animals, complex geometric designs and marine scenes that incorporate a multitude of fish and 2 ships.

“The archaeological excavation that we carried out this month was relatively small, but contributed significantly to our understanding of the villa building,” said Gorzalczany.

“Thankfully, the main central panel of the mosaic was preserved. The figures, many similar to the figures in the earlier mosaics, comprise fish and winged creature.

A fairly similar mosaic was discovered in the past in Jerusalem, on the Mount Zion slopes. The Lod mosaics, however, do not depict any human figures that are present in the Mount Zion mosaic. It is quite probable that the same artist produced both mosaics, or that 2 artists worked from a similar design.

This type of mosaic is better known in the western part of the Roman Empire.

“ALSO NOTEWORTHY,” continued Gorzalczany, ”are the rectangular marks that may denote the placing of the couches on which the participants of the banquet or feast reclined. These marks are common in similar villas and are an indication of the use of the space in the reception halls.”

The central panel of the mosaic has been displayed at museums around the world including the Metropolitan Museum in New York, the Louvre in Paris, the Hermitage in St. Petersburg, Russia, the Frost Museum in Miami, Florida, the Altes Museum in Berlin, the Cini Foundation in Venice, the Field Museum in Chicago and the Art Museum in Cincinnati, Ohio.

The Shelby White and Leon Levy Lod Mosaic Center project is a joint initiative of Shelby White and the Leon Levy Foundation, the Lod Municipality, the Lod Economic Development Corporation and the IAA. When completed, the centre will display the mosaics enclosed within a modern building that relates to the plan of the ancient villa in which they were originally laid.

Gorzalczany believes that the newly found mosaic may have paved an additional reception room next to the reception hall which was uncovered in 1996. “If this is the case, then the villa may be much larger than we supposed.

The discovery, in close proximity to the earlier hall, raises new questions: How large was the building? Did the villa comprise several reception halls? Where were the private living rooms? Was there a 2nd story? These issues may be resolved in future excavations.”

The visitor’s centre is scheduled to open in 2020.

Shelby White, the centre’s donor, said, “The Lod Museum will be a dream come true that began when my husband Leon Levy and I first saw the magnificent mosaic more than 20 years ago. This initiative could not have materialized without the strong support of the Lod community and the Israel Antiquities Authority.”

Lord Mayor Yair Revivo remarked, “It is fascinating to learn how many centuries ago the centrality and the potential of the Lod environs was appreciated by the ancient residents.

The establishment of the centre exhibiting aspects of the rich history of Lod will provide an impressive gateway to the town.”