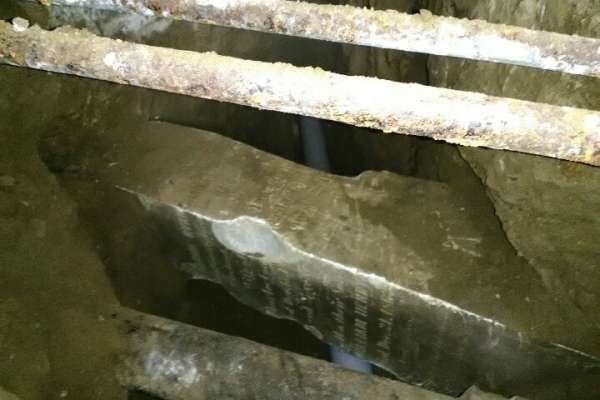 An underground group of electricians worked near a San Francisco home on Iris Avenue when they saw something mysterious — a piece of stone that had names on it.

As they got closer, they realized, perhaps with a little chill down their spines, that it was a tombstone.

“[It was] more of a shock than anything,” electrician Frank Graziano said of finding the stone. “All the guys were shocked and amazed at the same time. Never have seen or heard anything like it.”

A closer look revealed that the tombstone was 155 years old. The few names and dates carved on it document the lives and deaths of three San Franciscans: Charles Cooper, Catherine Ryan and their infant son William Henry.

With common first and last names, the Coopers are hard to trace through census and immigration records. But the 1862 San Francisco city directory only has one Charles Cooper.

His occupation is listed as an “ice cart,” indicating that Mr. Cooper made deliveries to wealthy residents looking for ice to cool their perishables. The next year, he’s working as a “teamster,” a general term for someone who drives a team of horses or oxen.

The Coopers lived at 324 Vallejo Street. Charles, from Germany, was 29. His wife Catherine, from Cork, Ireland, was 27. They must have been thrilled to discover in the early months of 1862 that they were expecting their first child. But their joy was short-lived; Catherine went into labor in December and something went fatally wrong.

She delivered their child, a son they named William but died almost immediately after. Without a mother and likely suffering from illness or infection, William lived 13 more days before his life, too, came to a premature end.

Days after burying his wife, Charles buried his newborn son in Laurel Hill Cemetery. The loss affected him deeply. Despite the fact, he married again, when Charles passed away at the age of 69, he was buried with his first wife and child, 40 years after their deaths.

Charles Cooper was survived by his second wife, Elizabeth, and their adult daughter.

The Coopers, luckily, are still resting in peace in Colma. Their original burial site, Laurel Hill Cemetery, was relocated after San Francisco banned burials in the overcrowded city limits in 1900.

Families whose loved ones were moved could take their gravestones with them but, if they chose not to, their stones ended up in landfills — which is likely how a modern-day crew stumbled upon the Cooper tombstone.

Upon making their discovery on Tuesday, the Lowes Electric crew called the city coroner’s office. After an inspection — which turned up no coffins — work resumed as usual.

The owners of the Iris Ave., home have opted to keep the tombstone where it is to let the Cooper family “rest in peace forevermore.”

“Those people lost their child so early,” Graziano said. “It tugs at my heart because I have four kids of my own. I couldn’t imagine it.”