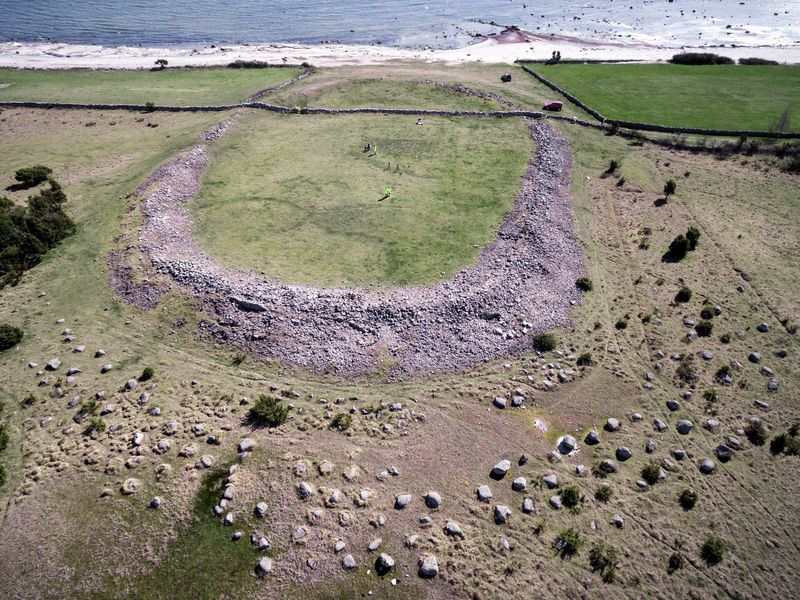 One night, some 1,500 years back, a band of marauders infiltrated a stone ring fort on the shore of Öland Island off the south-east coasts of Sweden. The attacker stabbed or clubbed every man in the wealthy village of about 200 or 250 people, killing children, as well.

The bodies were left to rot where they fell. The scene at Sandby Borgs was so gruesome that, though the detail has been lost to history, to this day islands local consider the old fort, now a green hill, cursed.

The outlines of this incredible story come from 3-year-long excavations of archaeological finds from Sandby Borg.

According to Nicholas St. Fleur at the New York Time, the ancient site attracted attention in 2010 when an archaeologist found a skeleton in the doorway of a house.

They later found more bodies, 26 in all. They all bore signs of violent death, including sword, knife and club marks. “It dawned on us that this was actually a massacre,” Clara Alfsdotter, graduate students at the Linnaeus University in Sweden and an archaeologist at the Bohusläns Museum, tells St. Fleur. “They were basically going from door to door killing everyone, from young childrens to older individuals.”

Among the dead was an old man who fell across an open fire, which burned through his flesh to the bones. Inside his skull, archaeologist found sheeps’ teeth, which Maev Kennedy at The Guardian reports could be interpreted as an insult from the killers to shame the man, who may have been a chieftain.

Another corpse is that of a teenage boy who tripped backwards over another body, likely from a killing blow.

Researcher also found bones from a months-old baby, showing the extent of the massacre. In one house alone, Kennedy points out they found 9 murder victims.

The attack appears to have been stealthy or sudden, as the remains of meals, including cooking pots and half a herring, were found sitting by cooking fires.

None of the skeleton exhibit facial or defensive wound, which also indicates they were surprised and did not have time to fight off their attackers.

Interestingly, however, archaeologist have not found any remains of women or girls among the dead. The massacre is detailed in the journal Antiquity.

So what, exactly, was going on at the Sandby Borg? St. Fleur report that though the fort was located on the coast, it is unlikely that the attack came from the sea since the high stone walls that surround it would have deterred pirates.

The fact that whoever conducted the massacre left behind all the livestock, jewelry, coinage, and other valuables, also offers persuasive proof that it was probably not a raid by bandits.

Because all the weapon in town appear to have been confiscated, the massacre could have been politically motivated.

The BBC reports that the period when the massacre took place was “during a turbulent period of intense migration.”

The Western Roman Empire which had brought stability and trade to Europe for hundreds of year had collapsed. The Huns were attacking from the east.

Local tribes were fighting each other and within themselves as new power structures were established.

A similar power struggle may have occurred on Öland Island itself, which was homes to at least 15 ring forts.

Ludvig Papmehl-Dufay, co-author of the paper and archaeologists at the Kalmar County Museum, tells St. Fleur that it is possible someone at Sandby was allied with another village or a political rival and may have opened the doors through the 13-foot stone walls for the attackers during the night.

“I think the purpose was to show some other peoples what happens if you mess with this group,” Papmehl-Dufay says. “This was more of terrorist attacks in that sense, the use of massacre as a political tool.”

We may eventually get more detail about who perpetrated the massacre and why. The BBC reports archeologists have only excavated three out of 53 houses at the site and hope to uncover more if they can secure the funding for it.