Charred grape seeds dating back 1,500 years were found recently in an archaeological excavation in the ruins of the ancient Byzantine city of Halutza, about 19 miles southwest of Beersheba.

In its heyday, in the sixth and seventh centuries A.D., Halutza or Elusa as it was called in Greek, was the most important Byzantine city of the Negev area.

The excavation is part of a broader bio Archeological research examining the rise and fall of the Negev Byzantine society, in the 7th century A.D.

The examination is conducted by the The Zinman Institute of Archaeology form the University of Haifa, and the Israel Antiquities Authority.

Tazpit News Agency interviewed Professor Guy Bar-Oz, one of the specialists participating in this project. Prof. Bar-Oz explained there are 3 main explanations for the fall of the Byzantine society in the Negev. “Climate change, Muslim conquest, and plagues all contributed to the fall.

But until now there were no physical proof to support any of these, only historical sources,” Bar-Oz told Tazpit.

“Though historical sources might provide a lot of useful information, they are very subjective to the writers agenda and premises.

There is also different current interpretation to each source. It’s very much like a modern day newspapers, it gives you a certain perspective but it’s not enough when looking for convincing evidence,” elaborated Prof. Bar-Oz.

The charred grape seeds were found in Halutza’s refuse dump, as the city itself was demolished over time due to stone theft. Prof. Bar-Oz explains the importance of what he calls garbage-archaeology.

“For an archaeologist, garbage is like a time capsule. We can extract a lot of valuable information from garbage, like what the people of Halutza ate and drank, the pots and tools they utilized, and what livestock they kept,” he told Tazpit.

In regard to the broader research, Prof. Bar-Oz explained that “a change in diet or even pottery can imply a change in the culture and Customs of the population of Halutza.

In addition, we can Determine the remains of dead animals such as rats, and through that find out whether the city was hit by plague.”

The charred grape seeds are a very interesting finding. According to historical sources from the Byzantine era, wine from the Negev or “Gaza wines”, named after the port from which it was sent to all corner of the Byzantine Empire, was considered to be of very high quality, and very costly.

The Halutza grape seeds could be of great importance to the wine business, because they indicate that wine was produced in the harsh desert climate of the Negev and was almost certainly grown with scarce usage of water.

“Wine production can be very much affected by evolving climates. Therefore, finding a strain of seeds that can grow using only a little bit of water in a warm atmosphere, could be a great revelation to the wine production industry,” Prof. Bar-Oz further explained.

According to Prof. Bar-Oz, the Halutza grape seeds will be recreated through DNA reconstruction.

And though it won’t explain the downfall of the seventh century A.D. Byzantine society of the Negev, it could explain why the wine of the Negev was so renowned in the Byzantine Empire. 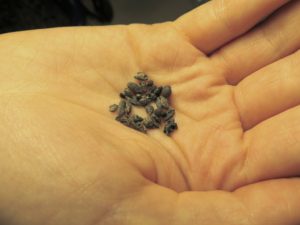