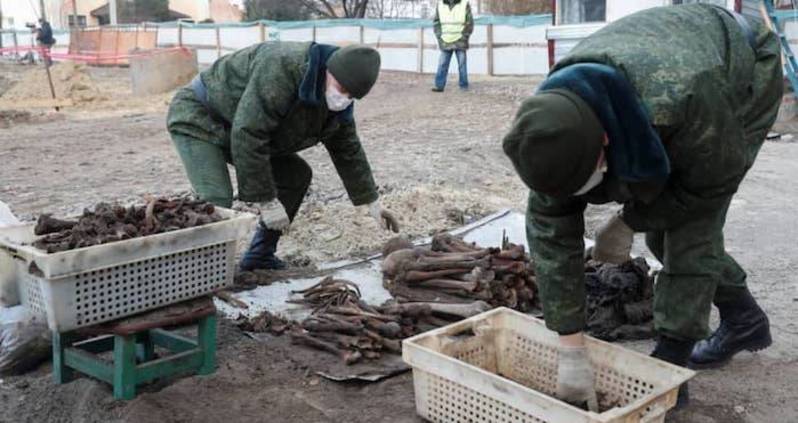 1,214 Jews Murdered in Holocaust Reburied in Mass Grave in Belarus

Nearly 80 years later, remains of the atrocities committed during World War II remain uncovered. The Holocaust still casts a broad shadow on those residing in impacted areas from Nazi-era Documents detailing Jewish populations in North America to mass graves in Eastern Europe being dug up in modern-day apartment houses.

It was a routine construction dig for the foundation of an apartment building in the Belarusian town of Brest that faced people with the 20th-century Jewish genocide when employees found 730 sets of human remains of Jews murdered by the Nazis.

The Belarus military took over excavation duties soon after, with soldiers currently having exhumed 730 sets of remains. Officials at the scene, however, believe that there are more to be found — possibly even under the adjacent streets being driven on every day.

“It’s possible they go further under the road,” said Dmitry Kaminsky, a soldier serving as project lead. “We have to cut open the tarmac road. Then we’ll know.”

The shocking discovery makes historical sense, unfortunately, as Brest was part of Nazi-occupied Poland, and used to segregate the city’s Jewish and minority residents into the Brest Ghetto. The mass grave uncovered by construction workers was found in that exact section of the city.

The excavation, though still in its early stages, has already shown evidence of murder such as bullet holes in many of the skulls.

Mayor Alexander Rogachuk has already initiated talks with regional and International Jewish groups about burying the remains in Jewish cemeteries.

The Nazis confined tens of thousands of Jewish citizens to the Brest Ghetto once Poland’s invasion had been secured.

This particular region of Eastern Europe carried the brunt of Hitler’s Holocaust efforts — 20,000 Jews in Brest were loaded onto railcars in October 1942 and sent to die in pits halfway between Minks and Brest.

These victims were dumped in mass graves alongside the bodies of 30,000 Jews from other cities who had been transported and executed to remote forests.

The ruthless efficiency in this kind of elimination was so staggering that when the Soviets liberated Brest in 1944, only nine Jewish citizens were there to greet them.

In recent news, Belarus has been heavily criticized for how the government has dealt with Holocaust heritage and Jewish memorial sites.

According to VICE, however, this negligent callousness toward Brest’s Holocaust victims is nothing new — even the liberating Soviets were keen on ridding the town of its Jewish culture when the war came to an end. The largest Jewish cemetery in the region was razed to build a soccer stadium.

Locals used the headstones tossed aside as part of the foundation of houses, paving stones for the street, and as decorative items for their gardens.

Research from 2014 showed 1,500 headstones adorning various parts of the city, with 450 of them being discovered during the construction of a local supermarket. Many of these are being personally conserved, as Jewish citizens cling to the hopes of a potential memorial site.

Fortunately, unlike the demolished cemeteries, these recently uncovered remains are set to be treated with the dignity and humanity its victims deserve.