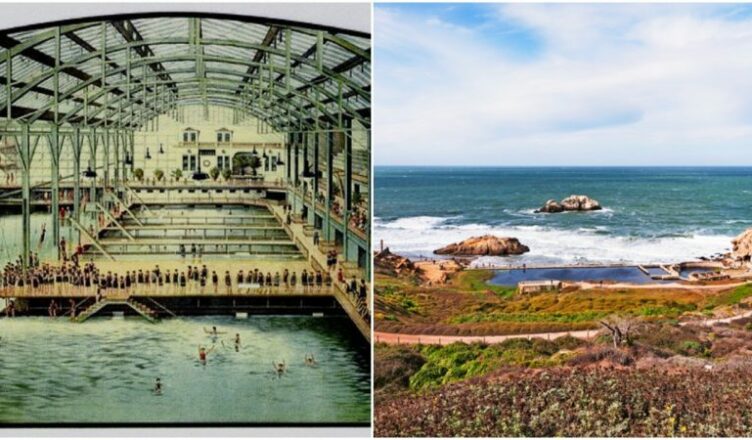 Sutro Baths in San Francisco: In 1896, it was the biggest indoor swimming pool the world ever witnessed

Know as “Fog City,” San Francisco has its fair share of historical buildings and structures, all of which have their own stories and tales and legends, even though many of these structures have been reduced to mere shells.

The famous Alcatraz is but one of the many structures that San Francisco has although it is hidden. Another one is the Sutro Baths.

Even though it is a mere ruin today, the Sutro Baths have a rich history and a poignant story. It all began on March 14th, 1896. That was the day when Sutro Baths first opened its doors to the crowds standing outside.

In its day, it was the biggest indoor swimming pool that the world had ever witnessed and Lands End–a park in San Francisco–was proud to be the home of it.

The man responsible for the construction of these baths was Adolph Sutro, the former mayor of San Francisco. Adolph was a wealthy and well-mannered man whose wealth increased as he continued investing in real estate throughout San Francisco.

Adolph also opened an aquarium before he set forth to build Sutro Baths. During the years leading to the baths’ construction, Adolph energetically promoted the idea of the project.

At the time, Sutro tried to protect the site where the baths would stand by erecting sea walls. He did this four times, three of which were unsuccessful and resulted in the walls crashing into the sea.

A while later, Adolph built himself a chateau that was known as the “Gingerbread Palace.” That was the year when he started to work on the soon-to-be Sutro Baths.

The engineering behind it was nothing short of perfect. The pools were constantly fed with seawater that flowed into them gently during high tide. In order to keep the pools clean, about 7,600 cubic meters of water were filtered every hour. The baths, in essence, were a complex of facilities.

As mentioned, there were the salt-water pools that were around 150 meters long (as much as three Olympic-size pools), 77 meters wide, and had 7 slides. Next, there was a museum filled with historical relics and artworks. Sutro also added an amphitheater with 2,700 seats.

There were no less than 500 private changing rooms and on top of it all, Adolph also added an ice rink to contrast with the warm Californian sun. In order to satisfy the demand of the thousands of visitors, the baths were served by two railways.

According to inside-guide-to-san-francisco-tourism.com, “Sutro kept the fees low so most city residents could afford to come: 5 cents for the train and 25 cents to swim (including a swimsuit and towel to use).”

But such a vast complex came with a burden of high maintenance costs. As years went by and the complex was worn by age, the costs of maintaining it became too great to bear.

During this period, the baths were struggled more and more and eventually were closed.

Not long after, a ruinous accident happened. The baths caught on fire and were demolished.

All that remained of this once glorious complex was mere concrete walls, a set of passageways, stair, and a forgotten tunnel. Despite everything, people still come to this site to marvel at both the ruins and the view as well as the sheer size of the complex.

The baths’ grounds also served as the perfect filming ground for a movie called The Lineup filmed in 1958 and directed by Don Siegel. Today, this whole area is part of the Golden Gate National Recreation Area and is known as the Sutro Historic District.