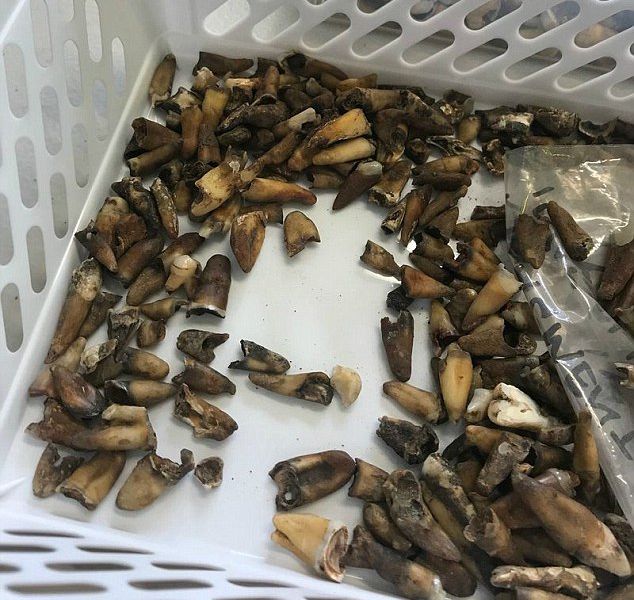 Australian dentist J.J. Forster, who practiced in Melbourne between 1898 and the 1930s, attracted patients with his guarantee of teeth removal “truthfully without pain.”

But the roughly 1,000 rotting molars Excavated during the construction of a metro line near Swanston Street, one-time home of Forster’s practice, tell a different story.

Sean Davidson of 9News reports that Forster and other local dental specialists likely pulled the teeth rather than attempting to repair them.

In spite of the fact that those seeking root canal treatment or teeth removal were given anesthetics containing cocaine, novocaine or nitrous oxide (also known as laughing gas), these medications were far less effective than modern-day ones. As dentists poked around patients mouths with levers and forceps, both parties must have fervently hoped the anesthetic was not on the verge of wearing off.

Those visiting the office for a filling were left in an even worse state, as dentists often neglected to provide anesthesia for such simple procedures.

“It would have been horrible,” Evans says, noting that dentists used a vibrating, pedal-driven drill in order to hollow out the offending tooth.

In addition to pulling teeth with all the aplomb of a bull in a china shop, Forster and colleagues probably spared little consideration for the fate of these removed teeth, which were discovered scattered across the dentist’s property and stuffed into an iron plumbing pipe.

“We think he was not that good at discarding teeth in a hygienic fashion,” excavation director Megan Goulding tells 9News’ Davidson. “He likely flushed them down toilets or the basin.”

According to a press release, the excavation that uncovered Forster’s sordid collection of molars is part of an $11 billion metro construction project.

Five new underground stations are set to open in 2025, but in the meantime, archaeologists are conducting 2 or 6-month digs in Melbourne’s central business district, which has undergone rapid growth since its founding in 1837.

Forster’s practice, situated at 11 Swanston Street, stood alongside historic buildings such as an early school for girls, a hotel and a hardware store.

Betting -related items, including 20 cattle bone or ivory dice, were discovered at the site of the former hotel, Davidson reports.

The array of artifacts—currently numbering roughly half a million and anticipated to reach up to 2 million—unearthed by the digs reveal an intimate portrait of 19 th-century domestic life.

New discoveries are continually posted on the Metro Tunnel Project’s website, permitting locals people and interested out-of-towners to immerse themselves in the city’s history.

A stone lion figurine, believed to have sat on the lid of a teapot brought from China during the height of the Gold Rush, speaks to Melbourne’s international links, while a James Dickson & Co. ginger ale bottles represents ventures launched closer to home.

Locals passing by the archaeological site are free to observe researcher in action via special viewing windows.

The Age’s Webb notes, a selection of artifacts from both excavations will be placed on display at the local visitors center.

“It’s quite evocative,’’ Goulding tells Webb. ‘‘Every aspect of our European past is here on the site and you can still see it.’’