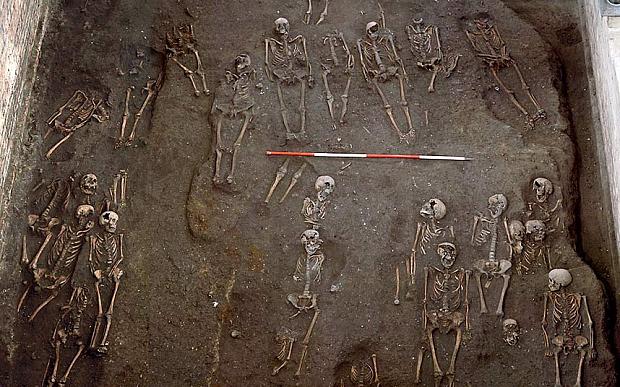 The mass cemetery contained around about 1,000 burials, including about 400 complete skeletons.

A lost medieval cemetery discovered under Cambridge University contained graves that had been pre-dug in anticipation of winter deaths, archaeologists have Found.

The huge graveyard was found during Exavation Under the Old Divinity School at St John’s College during recent refurbishments.

The mass graveyard, which was far larger than the small burial ground which archaeologists had expected, contained around about 1,300 burials, including about 400 complete skeletons.

And specialists made the sinister discovery that many of the skeletons did not fit their graves.

An Archaeological Journal report on the excavation stated: “This suggests that some, but not all of the graves may have been dug in advance of being needed.

“One possibility is that this occurred prior to the winter, when ground conditions would have potentially made digging graves considerably more difficult.”

The bodies, which generally date from a period spanning the thirteenth to fifteenth centuries, are burials from the medieval Hospital of St John the Evangelist which stood opposite the graveyard until 1511, and from which St John’s College takes its name.

Craig Cessford, from the university’s department of archaeology and anthropology, said it was one of the largest finds of its kind in the UK.

Although the existence and area of the cemetery have been known to historians since at least the mid twentieth century, the sheer scale and extent of the burial ground was unclear until now.

The vast majority of burials were without coffins, many even without shrouds, suggesting the cemetery was primarily used to serve the poor.

There were very few bodies belonging to women and children – probably because its main purpose was to cater for “poor scholars and other wretched persons” and pregnant women were excluded from its care.

Grave-goods such as jewellery and personal items were only present in a handful of burials but they included a jet crucifix and the head of a woman.

Dr Cessford said: “Proof for clothing and grave-goods is rarer than at most hospital cemeteries.

“This is principally because this was a purely lay graveyard with no clerics present.

“Items were found in graves that might represent grave goods, but their positions were ambiguous and it is equally possible that they represent residual material from earlier activity at the site.”

Originally a small building on a patch of waste ground, the hospital grew with church support to be a prominent place of hospitality and care for both university scholars and local people.

Despite local rumours linking the hospital cemetery to the Black Death, no proof of this disease was found on any of the remains and the team did not find any sign of large burial groups from that period of the 14th century.

In later centuries, plague victims in Cambridge were buried on local grazing land such as Midsummer Common, and it is likely that the same areas were used in the medieval period as well.

Most of the bodies were buried in neatly laid out rows or deposited in a building on the site.

The graveyard was found to have had gravel paths and a water well, along with seeds from various flowering plants, suggesting that much like present cemeteries, it was a place for individuals to come and visit their deceased loved ones.

The bodies surprisingly did not exhibit many serious illnesses and conditions that would have required medical attention.